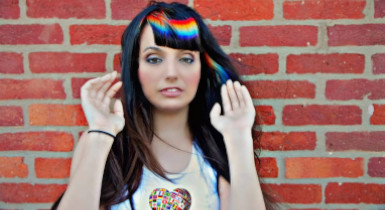 Artist United was created as response to isolation and separation during the 2020 worldwide pandemic and lockdown, with the goal to build a bridge between countries, and bring together creative minds from every nation.

New York, NY – USA | March 15, 2021 — 1 Year Ago Today, March 16th 2020 The Global Inclusive Community for Artists from all Around the World, Artist United founded by International Recording Artist and Composer Veronica Vitale together with her husband American film director Patrick J Hamilton. Artist United was created as response to isolation and separation during the 2020 worldwide pandemic and lockdown, with the goal to build a bridge between countries, and bring together creative minds from every nation.

“Our entire careers are based on the fact that we can freely travel and connect with people and industries, we usually spend 6 months in Italy and 6 in the United States. Last January as we landed in Atlanta for the worldwide release of my most wanted project “Inside The Outsider” we actually ended up stuck there for a year. No way back home. Our families were divided oceans apart, our plans were paused for good and I was dealing with severe loneliness while healing after a severe surgery I got to remove a myoma. I was far from my beloved country and the shocking images of Italy, the deserted Vatican and the Pope walking alone, under the rain in St. Peter Square, the Italian hospitals in a state of collapse were the leading factors that inspired me to compose my Prayer and “Hymn To Humanity – Preghiera per l’Umanitá” which immediately reached over 250.000 streams on Facebook. Hymn to Humanity is the tale of humankind waiting in the shadow of the night for daybreak.” – says Artist Veronica Vitale

Hymn To Humanity was originally sung in Italian English and Hebrew by Veronica Vitale alone, and the very next day after release the Artist decided to create a second version of her song starting a global call for artists to inspire hope and universal brotherhood in times of horror & hardship.

“In my life, I faced bullying, cyberbullying, sexism, and racism. So I HAD to create an alternative “way of doing” music and art, a “place of the way” where all humanity can meet, connecting real audience to real artists and reverse, in a mutual support of their ideas. All Artists are Welcomed.”

The World Choir of “Hymn To Humanity” was performed by 250 voices in 25 languages and all in one song. A Movement who called the attention of the world’s press from Australia, to United States, United Kingdom and Middle East.

One – of a kind upgrade of the Artist United Community is the partnership deal signed with XOTV. This partnership gives Artist United Members the opportunity to start their own channel with the support of Visionary Vanguard Records Crew and the added perks of having their content seen by potential sponsors and various major brands for product placement. The options for content delivery are incredible: Live Streaming, Ticketed Online Events, On Demand Content, Monthly Subscription Based, Pay Per View, Downloadable Content and much more.

SOME OF THE SHOWS SOON AVAILABLE ON XOTV:

CO-EXISTENCE “JOY, TRUTH AND PAIN” – BY MISHA SAFRAN, a Brilliant Advocate for Equality and Self-Awareness from California very well known on social medias for her strong empathy and deep knowledge of the dynamics of modern social systems.

TALES OF THE OUTBACK – BY ANNE FRASER Australian Singer and Songwriter from the slopes Volcano of Mount Gambier located in South Australia which shares the Australian culture of life, discovering talented artists that are home grown, the indigenous music and culture, personal view points on humanity, compassion, art and soul connections, and tell her own story from the early beginning of her music career in order to encourage others to keep singing and creating the love with music.

THE SPECIAL ONE – BY MAHMOOD AL-HAIKI Straight out Bahrain, born in 1991 with physical disability in the limbs, will share a motivational series made of resilience. Despite his disabilities. He founded the “Dream Team” and gained his public recognition for his inspiring and motivational flash-mobs and speeches such as “You are Stronger” and “But My Mother is Different” “Who are They” and “You Have No Excuse!”

BEYOND SOUNDS – BY “MARIE” MARIANA AGUIAR Music Producer and Radio Hoster from Portugal.

HURDY GURDY NEW AND OLD MIDDLE AGE’S FOLK MUSIC – BY MONIKA FINK Straight out of Austria, across the Alps and the breathtakingly European landscapes, artist Monika Fink presents an exciting leap into the past with her “Hurdy Gurdy”. A Voyage between old and new middle ages Folk Music.