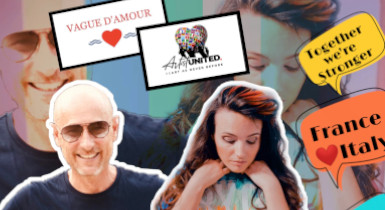 Saint-Estève, France | June 16th, 2020 –(Press Release Wire)– A true love story: founded in 2017 by Fashion designer Louis-Philippe Vallès, la Vague d’Amour is a brand created in order to carry a universal message of true love around the world. Mr.Vallés is the mind behind the famous “wave-shaped bracelet” a message of universal love: to connect, to come together in order to transmit, give and share all together. Wavy and colorful, these bracelets represent the ups and downs of life. Symbolically, while wearing them, you can make 3 wishes, one for yourself, one for the person who receives it as gift and another for the planet. – “By founding the Wave of Love, I wanted to create a real surge of generosity: it materializes in bracelets in the form of waves and pretty t-shirts which help to finance associations and transmit a message of love” – said Louis-Philippe.

The Founder of the “Wave of Love” meets Artist and Executive Producer Dr. Veronica Vitale, one fine day on Instagram. Veronica Vitale has recently founded the Movement “Artist United – heart like never before” with her husband American Film Director Patrick Hamilton as relief platform in response to COVID-19 for all artists around the world to come together as one for hope and universal brotherhood during Humanitarian Crises and Hardships. Veronica’s dream chapter about humanity has started back in 2013, as she worked with twice nominated for the Nobel Peace Prize Dr. Ervin Laszlo in the field of Quantum Physics and Global Macro Shift. Veronica Vitale holds three university degrees and a Ph.d in evolutionary systems scientist and is known in her industry as a catalyst for change. 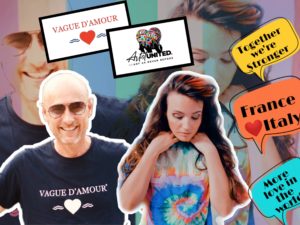 Veronica Vitale brought together thousand people in a matter of days, and recently released a song (“Hymn To Humanity” Choir Edition) performed by over 250 voices from Africa, to China, Tanzania, Croatia, Russia, Pakistan, Congo, from Afghanistan, to Australia and Italia, to the Chief Shuar Amazon of Ecuador, and sung in almost every main spoken language in the world. The Song Veronica Vitale composed is to be considered a successful Anthem to Earth and Humakind. One of a kind.

The love project “Vallés – Vitale” aims to support this young movement by producing a special edition t-shirt that links the two brands “La Vague d’Amour” and “Artist United” together as one. Every t-shirt will carry the quote “More Love in the World” translated in every native language and shipped to every Artist who sung the Hymn to Humanity composed by Veronica Vitale. The special edition t-shirt will travel to every country and it is wholeheartedly donated by Mr. Louis-Philippe Vallés. 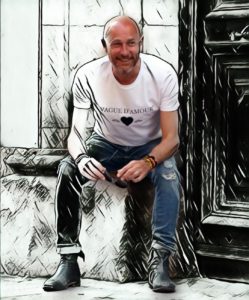 “I thought to involve Mr. Vallés in this project because he is a sensitive soul like myself. I would like to hire his company in the future to produce a specific fashion line for my own brand and upcoming album as soon as the consequences Covid-19 has caused to the independent industries” – says Veronica.

As Matter of fact, Executive Producer Veronica Vitale and French Fashion Designer Louis-Philipps Vallés are to be considered two modern Peace Builders in their own industry. “A burst of light over the dusk above the human pain” as the Hymn to Humanity’s lyrics says. 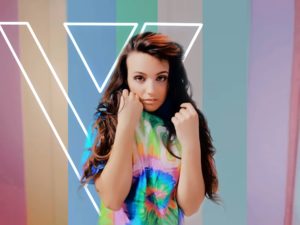