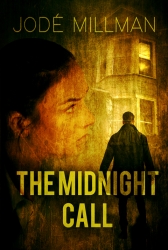 Immortal Works Press is proud to announce the release of The Midnight Call by Jodé Millman. This is Ms. Millman’s debut novel.

Salt Lake City, UT – USA, July 03, 2019 –(Press Release Wire)– Immortal Works Press is proud to announce the release of The Midnight Call by Jodé Millman. This is Ms. Millman’s debut novel. The Midnight Call was short-listed for the 2014 Clue Award and received the First Place Blue Ribbon as “Best Police Procedural” by Chantireviews.com.

Ms. Millman’s novel was inspired by true events from her own past. In 1979, Albert Fentress, a former teacher of Ms. Millman’s, tortured and killed 18-year-old Paul Masters. The case became the first in the New York history to accept a plea of not guilty by reason of insanity.

About The Midnight Call:
Who would ever suspect that their mentor, teacher, and friend is a cold-blooded killer? Attorney Jessie Martin didn’t—at least not until she answers the midnight call. Late one August night, Jessie’s lifelong mentor and friend—and presently a popular, charismatic, and handsome high school teacher—Terrence Butterfield calls. He utters a startling admission: he’s killed someone. He pleads for Jessie’s help, so out of loyalty she rushes to his aid completely unaware that she’s risking her relationship, her career, and her life—and that of her unborn child—to help Terrence.
To reclaim her life and prove her innocence, Jessie must untangle the web of lies and reveal the shocking truths behind the homicide. This quest turns out to be the fight of her life: to preserve everything and everyone she holds dear.

About Jodé Millman:
Jodé is a lifelong resident of Poughkeepsie, New York, which serves as the setting for her legal suspense novels. In her writing, she draws upon her experiences as an attorney to capture the tensions that arise when a small community is rocked by tragedy.

She received her BA and JD from Syracuse University. Presently, she co-hosts and co-produces the Backstage with the Bardavon Podcast.

If you would like more information about our authors, upcoming releases, and our Flash Fiction Friday podcast, visit us at www.immortal-works.com to join our mailing list.