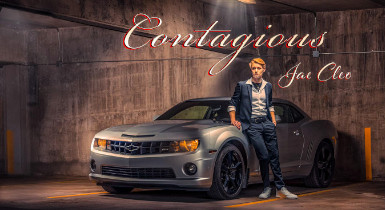 With Jae Cleo releasing his new single Contagious, he’s looking for the balance that will put him in the pop genre but showing the fans that he has an R&B appeal.

Spokane, WA – USA | April 03, 2022 –[Press Release Wire]– From an early age, the Spokane, Washington native, Jae Cleo knew that music was his true love. His parents often found him listening to the same music influence they did and because of that influence Jae Cleo picked up the guitar and began his personal rehearsal time at home. It was then he really developed the capacity to learn music from both an instrumental and vocal standpoint. Jae Cleo’s commitment to his music became more of a passion rather than a pastime.

With Jae Cleo releasing his new single Contagious, he’s looking for the balance that will put him in the pop genre but showing the fans that he has an R&B appeal. Produced by Marco B and written by Courtlin Jabrae, Contagious has bass line that is infectious, with raspy voice letting his leading last know that she’s “Contagious”

Jae Cleo is currently finishing up an 8 song EP Executive Produced by LeWayne Battle of Bully Park Records and his executive producer Kimberly Buck. With music videos in the works. He has collaborated with several accomplished producers, musicians and engineers and continues to produce music.

Jae Cleo signed a management deal with Underground Hits Production who’s current roster includes GENE$I$ MORIAH, Ye Ali, The TrackKillers, Kristina Danielle, Scales, and Sheldon Body Jr. He has been focusing on this musical project that is sure to secure him a spot as a new-age, urban pop, game changer. His musical influence includes music legends ranging from Michael Jackson, Justin Timberlake,, John Lennon, and Bruno Mars all of which he credits for helping him discover his vocal path. With a promising career ahead of him, Jae Cleo is expected to reintroduce pop music to this upcoming generation.