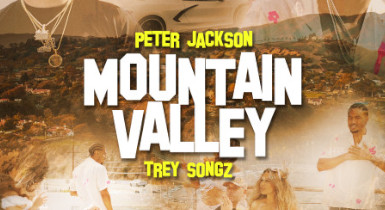 Toronto, ON, Canada | February 08, 2022 –[Press Release Wire]– Back in 1967, legendary Motown singer Marvin Gaye released one of his biggest records of all-time. The classic duet “Ain’t No Mountain High Enough” peaked at #3 on Billboard’s US charts, was inducted into the Grammy Hall of Fame in 1999, and remains a key staple in Gaye’s celebrated catalogue.

On Feb. 11, with the support of Virginia-born contemporary R&B singer Trey Songz, Canadian recording artist Peter Jackson looks to recreate the song’s success with his own new modern day take on the hit. “Mountain Valley,” produced by KeanuGoinStoopid, JBat, and Pilot Beats, is the first of several new singles on the way to support Jackson’s next album, slated for the second quarter of 2022.

The song is about believing in yourself, and remembering that no matter what you dream of, no mountain is too high. It’s a testament to Jackson’s self-made success in the entertainment business, and his ability to overcome the obstacles that have been thrown in front of him, no matter how big the challenge.

“This record means a lot to me,” said Jackson of the release. “It started as just a gift for my mentor and friend, but he saw it as a lot more, and wanted to see it come to life for me. I’ve spent this last year working on myself and bettering my life. Music will always be first and foremost to me, but I had to get my mind, and soul correct. My mentor helped me do that, so, in return, seeing this song come out as the album’s first single and really succeeding means absolutely everything to me.”

Known for his intense work ethic—in the studio, boardroom, and on the road—Jackson has spent the past few years touring Canada and Europe with some of the biggest artists in hip-hop, and performing at some major events on the national stage. He served as the supporting act for 50 Cent at the 2017 Calgary Stampede, performed alongside Fetty Wap at the 2019 Grey Cup celebrations, and was on a Canadian arena tour as the supporting act for international icon, Snoop Dogg. 2019 also saw Jackson headline his first solo tour across Canada, while also doing 22 shows across Europe with Fetty Wap that same year.

Along with the new single, “Mountain Valley” will be released with video support directed by Shawn Thomas of Canadian Film Coalition. The vibrant and energetic clip was shot over the span of a few days between Los Angeles and Malibu, California, and comes as Jackson’s first visual offering since tapping Jim Jones for “Fell” back in February 2021. “Fell” followed Jackson’s single and video for “If It’s You” (featuring Fetty Wap) which has been viewed over 1.1 million times to date on YouTube.

Jackson’s new album In God’s Hands will be his first project since releasing his 23 & A Half EP in June 2020. Along with Trey Songz, it will feature 2021 BET Hip Hop Award-winner Yung Bleu, and more.

“Mountain Valley” is available now for pre-save and pre-order on digital streaming platforms. The single will be available everywhere on Friday, Feb. 11, while the video is expected to drop Wednesday, Feb. 18.