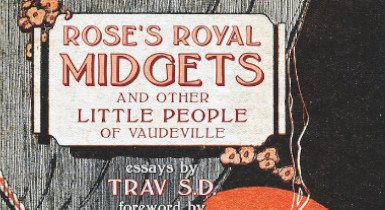 A new book from Vaudevisuals Press celebrating the unique performing troupe that toured the USA in the early 1920s through the 1950s.

Brooklyn, NY – USA | January 4, 2021 –(Press Release Wire)– “Rose’s Royal Midgets and Other Little People of Vaudeville” tells the story of this company. Illustrated with over 100 original vintage postcards and photographs from the company.

“A fascinating glimpse into a vanished world, as cynical as it was magical, but always fascinating.”

This fascinating book starts with the story of Rose’s Royal Midget Troupe, the creation of one of show biz history’s great impresarios. Ike Rose was in a league with Barnum and Ziegfeld as men who transported audiences to a magical world for the price of a ticket. It is enhanced with personal remembrances by the mother of Gladys Farkas, one of the original members of the Troupe.

Author Travis S.D. — whose wide-ranging credits include actor, comedian, playwright and producer, humorist, journalist, director and critic — is immersed in the field of eclectic performance.

Trav S.D. (www.travsd.com) has written for the NY Times, the Village Voice, American Theatre, Time Out NY, Reason, the Villager and numerous other publications. He has been in the vanguard of New York’s vaudeville and burlesque scenes since 1995 when he launched his company Mountebanks, which has presented hundreds of top variety acts. He has directed his own plays, revues and solo pieces in NYC since 1989 at Joe’s Pub, La Mama, Dixon Place, Theatre for the New City, the Ohio Theatre and the Brick. In 2014 he produced and directed the smash-hit “I’ll Say She Is”, the first-ever revival of the Marx Brothers madcap hit. He is perhaps best known for his 2005 book No Applause, Just Throw Money: The Book That Made Vaudeville Famous, cited by Bette Midler in People magazine as one of her favorite books.

The many exclusive visuals iin this book include photographs of the shoes and gloves used by Gladys Farkas in her act, and images of her with Ike Rose. Sideshow historian James Taylor (author of Shocked and Amazed, https://amzn.to/2EOGkNV) has written the illuminating Foreward.

But wait, there’s more! This BIG STORY also brings to light many of the other ‘little people’ acts performed in circuses, sideshows, carnivals and dime museums, from the early 1900s through the 1950s. The book reproduces a treasure store of photographic “cartes de visite” and vintage collectible postcards which were originally sold by the performers at their shows.

The last book devoted to the wonderful performances of ‘little people’ was published in 1980. This new book brings amazing new material to light and is a rich trove of stories and visuals. It is an important addition to the archive of performing arts.