A Saint’s Letters from the Depths of Hell, brings to light the story of a young man who had a burning desire to serve his country but also wanted to be home with his family.

First, the July 2002 death of Ralph’s mother and Vinnie’s older sister and best friend, led him to find dozens of letters that Vinnie had written to Lilly during his tour in Vietnam in 1967-68.

Then, he underwent years of research to understand the circumstances that led Uncle Vinnie to Vietnam and how he lost his life there.

Finally, Ralph met the Marine who held Saint as he uttered his final words before dying in his arms.

A Saint’s Letters from the Depths of Hell, brings to light the story of a young man who had a burning desire to serve his country but also wanted to be home with his family. He looked forward to coming home and enjoying the things that many of us often take for granted. 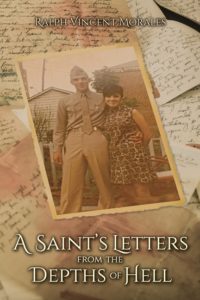 A unique and powerful connection between siblings birthed this story of courage. An unlikely and serendipitous connection with the man who witnessed his Uncle’s death birthed in Morales a heightened recognition, honor and respect of those who served in Vietnam, and for the Gold Star families that lost loved ones during the war.

“The process took my understanding and compassion of those who serve our country to a new level. Although I already respected and admired these heroes, I realized that I had so much more to give.  I hope this book serves to similarly enlighten its readers,” states Morales.

“Ralph connects us to Vietnam in a personal way through the letters shared between siblings and the relationships with whom Vinnie served,” explains Publisher Lisa Umina.

Whereas Vinnie formerly was only a mythical man that neither Ralph nor many of those who will read this book had ever met, Saint is now an Uncle, a friend and a symbol of so many other fallen heroes who were not able to “go home.”

In print, Morales may ensure that Uncle Vinnie doesn’t die a second death.  As Banksy, the anonymous England-based street artist advises us, “… when somebody says your name for the last time.”

Author Ralph Vincent Morales is a highly respected trial attorney, community member, volunteer, coach, husband and dad. Celebrating justice, freedom and love, he prioritizes his family and sees this book as his humble way of saying thank you to not only Vinnie, but to all who have served in our military.

For more information about Ralph Vincent Morales visit www.halopublishing.com. A Saint’s Letters from the Depths of Hell is now available at Halo Publishing International, Amazon, Barnes and Noble, Goodreads, and Books-a-Million.